Managed by surfers for surfers, Las Flores Surf Club's pride is its signature break "Las Flores" -- a world-class, 300-meter-long, right-going freight train that forms outside the point and peels across the cove up onto the sand just meters from the front of the hotel. The epic location of the Las Flores Resort directly in front of the wave is without rival. In combination with the beachfront hotel's modern facilities and amenities, panga fleet for surfing and fishing the area, in-house surf school and the personalized service of our surf guides and staff, the result is practically unprecedented in surf travel.

The East coast, contrary to belief, is not the Caribbean coast, in fact EL Salvador has no Caribbean coast only a Pacific coast. Because of the El Salvador coast's due south orientation the country is divided into 2 regions, "El Oriente", East, and "Occidental", West, a.k.a "La Libertad". The East coast of El Salvador gets the same swells as the West coast and La Libertad. These swells are generated by storms in the Southern Hemisphere and occur with regularity from March-November. Average wave heights are 4-8ft on the face, with bigger days to 10-15 ft faces possible, and rarely if ever under 3 feet. The consistency is 90% or greater. December-February still breaks but is less consistent, 1-3ft mostly, with days to 5ft possible. This season offers sunny skies and pleasant conditions however strong side-onshore winds are common (ideal for kitesurfing). The main draw here are 5 righthand pointbreaks located along a 10 mile stretch of rugged, mountainous coastline. Most famous of the breaks are Las Flores and Punta Mango. Besides these 2 waves there are at least 3 other quality points in the region.

El Salvador has a dry season (Nov- Apr) and a wet season (May-Oct). One should not be deterred from traveling to El Salvador in the "Wet season". The majority of days in the wet season are fair with occasional afternoon and evening thunderstorms, and the wet season is generally when the surf is biggest and best and glassiest. The dry season, or "summer" (November-April), offers beautiful, sunny conditions, but typically has more wind, especially January-March, when the onshore comes up by 9 or 10am, and Dec-Feb is smallish and inconsistent.

The water temperature is between 78F and 86F year-round. Unlike neighboring Nicaragua or Guanacaste, Costa Rica, El Salvador does not get the strong local offshores that cause upwelling, and El Salvador water temperatures are among the warmest in Central America. The air at the coast is hot and humid, in the 80's and low 90's generally. Strong sun protection is mandatory.

Though waves up to double overhead are common, gunny boards are generally not needed. 5-10 to 6-6 thrusters are ideal, with a 6-8 or 6-9 rounded pin for the heaviest, low tide sessions. Funboards, longboards and fish also work well in these sometimes machine-like pointbreak conditions.

Las Flores Surf Club has 3 boats to deliver you into the best waves at the East coast: 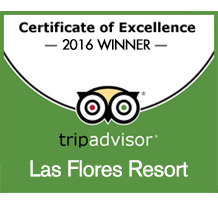